Can I just start off by saying, I love Paris! Like, I seriously love Paris. I know, I know, everyone says they love Paris; however, recently before leaving, I had multiple people tell me they were disappointed by Paris, they had bad experiences, the Parisians were not helpful, they hate Americans, blah blah. The list goes on. I just want to take a second to thank everyone who told me this because I went to Paris with an open mind, and because of this my expectations were not outrageously high like others might have been. I think this actually made Paris better for me. The city is so perfect with its wonderfully decorated Parisian style, its buttery and extremely flakey croissants, and don’t even get me started on the macaroons and baguettes. Almost every single person (besides 2 🙂 ) that Sean and I crossed paths with were extremely nice and helpful. We even had someone in the subway completely stop what they were doing, take off their headphones, and ask us if we needed help. I guess the extremely perplexed looks on our faces staring at the daunting subway map not only made us anxious, but made others around us anxious as well! lol. This really nice guy went out of his way to speak to us in broken English. He asked us-not the other way around. He ended up saving us 20 minutes, and a bunch of frustration by notifying us the line we wanted to take to Notre Dame stopped running at 5:00pm. It was then 6:30pm. Overall, we met really great people who gave us wonderful suggestions.

Sean and I did so many things in Paris. We were non-stop from the second we got there, and I wouldn’t have it any other way. On our first night out in Paris, we did a Viator Tour that took us to the Eiffel Tower for dinner, than an evening 1-hour Seine River Cruise tour, than tickets to the Moulin Rouge with complimentary champagne, which was amazing. Sean and I are STILL talking about that night. It was a little over 5 1/2 hours, and we were exhausted after, but it checked everything off our list. It also included transportation, and we got to chat with other couples around the world. We met a couple from Australia and a couple from Scotland, and both were wonderful! All in all it made for a great Parisian night out. 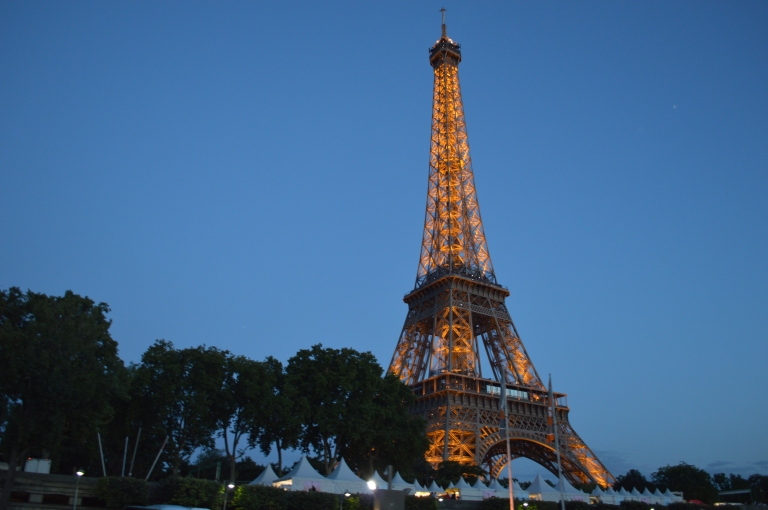 Sean and I stayed in the cutest little Parisian neighborhood deep into the Trocadero next to Passey Place. It was perfect location for us to walk almost anywhere. We were very close to many boulangeries (bakeries). It was not touristy, so we were able to get a true local Parisian feel, which I loved. It also gave us access to even better croissants! 🙂

We met our tour guide through Viator in the center of Paris at the Pyramides. She then took us on a very scenic bus ride throughout Paris, and gave us our tickets to the 2nd floor of the Eiffel Tower. The views were gorgeous! It reminded us of the Sears Tower in that you were able to stand on a clear platform that looked at 100s of feet down! Very creepy. The food was absolutely delicious. We enjoyed it! 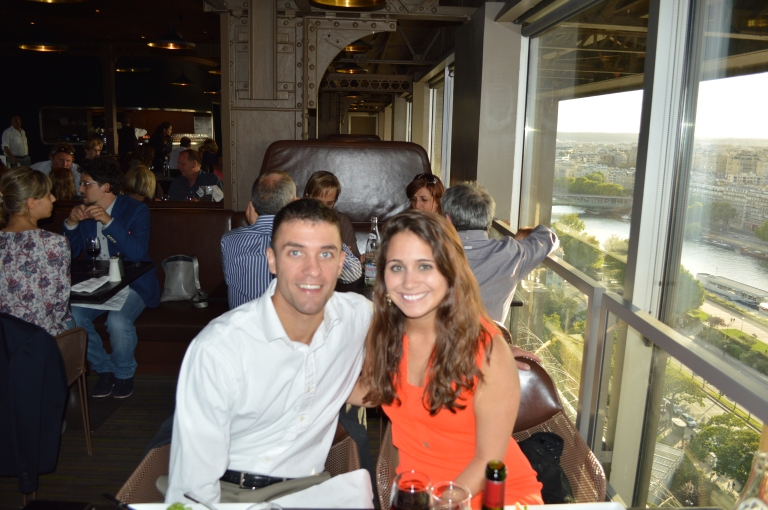 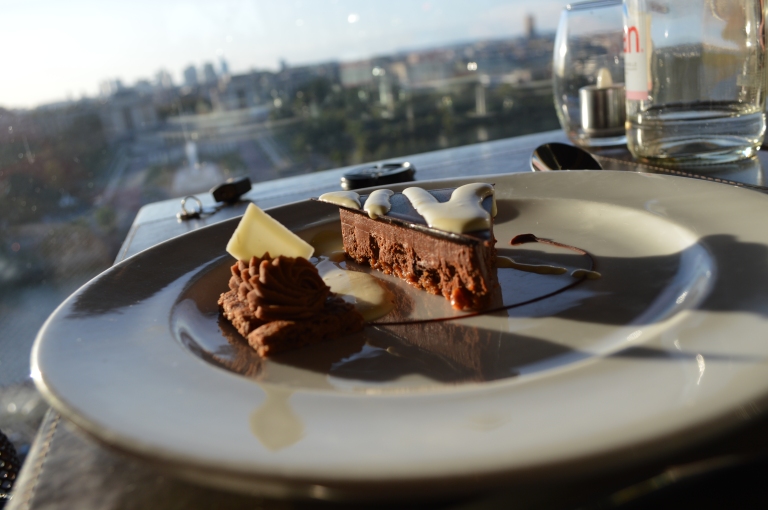 We had grilled chicken over au gratin potatoes. I know you are wondering what the foam is….I am not too sure. It tasted interesting, that is all I can say. I wiped mine off. Haha! Dessert was a delicious chocolate mousse. We finished dinner as the sun was setting, and the Eiffel Tower lit up beautifully. It was perfect. My only complaint was the weather, and how cold it was, but I dealt with it. I mean come on, I was in Paris. I got over it real quick….after my fingers numbed up and fell off. Just kidding.

Views of Notre Dame, the Eiffel Tower, and the Point Alexander Bridge on the Seine River Cruise: 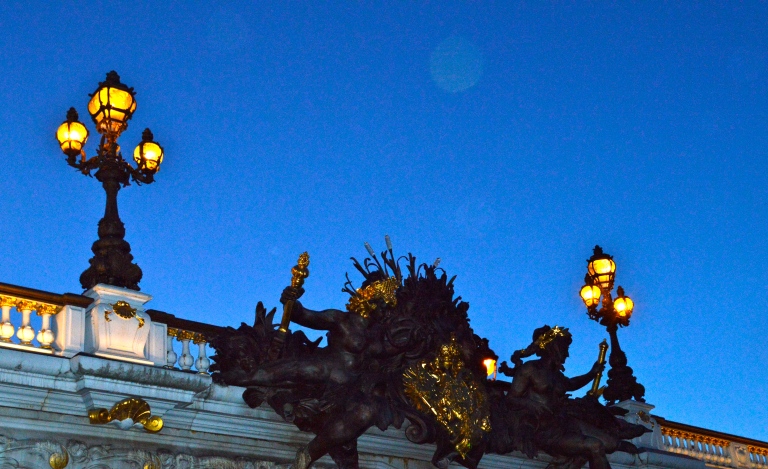 Our favorite part of the night was the Moulin Rouge. Who doesn’t love free champagne and a good show? No, it was nothing like the movie. It was 90 minutes of non-stop dancing, singing, and flashy costumes. We went into it thinking it would be somewhat cheesy, but to be perfectly honest with you it wasn’t! Of course, it had the typical song and dance, but it included acrobatics, crazy lifts, and an underwater swim/danceish(?) with anacondas….I kid you not anacondas! It was nuts. Oh yeah, there was also a ventriloquist that was pretty hilarious. 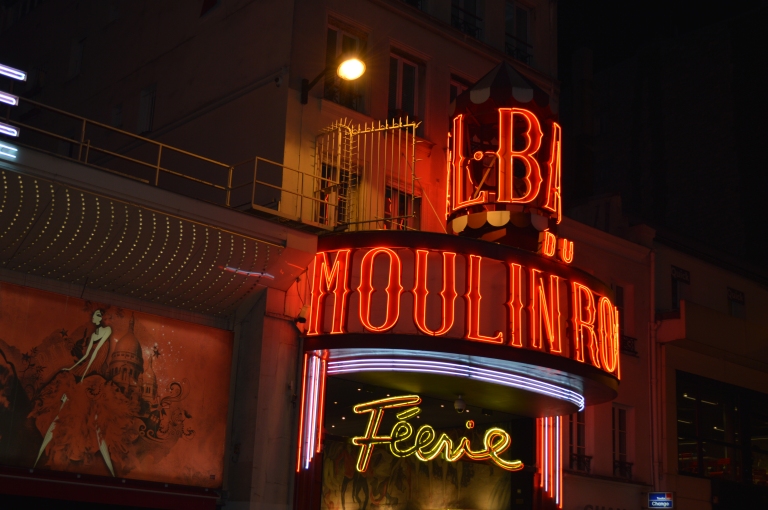 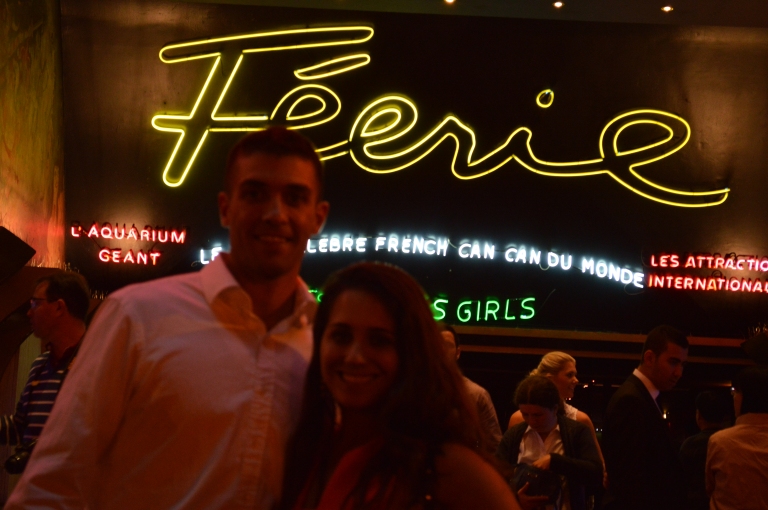 More to come on Paris. Until next time, Love Bugs! xo